DCM 6th Regional Directorate, Burdur 13 kilometers away and situated in the first cave opened in Turkey’s tourism in 1965 in Çatağıl village limits bear the title Insuyu started working for the discovery of covered area to visit the cave. DCM 6th Regional Directorate of the President of Turkey Caving Federation in coordination Bulent Young, Akdeniz University and Istanbul Technical University Cave Research Club with the participation of members March 26 in the history of the caves in the visit to the indoor galleries and lake surveys and assessment studies were carried out.

LASTED THOUSANDS OF YEARS AGO

The cave, which was reopened after two years of restoration work and whose formation dates back thousands of years, is geologically composed of limestone. It is estimated that a 1-meter column was formed in 10 thousand to 15 thousand years in the cave where stalactites, stalagmites and corridors were formed as a result of the combination of these limestones with water. The cave, which has a horizontal length of 597 meters, has 9 lakes in the section up to 500 meters that can be visited. The lakes of the cave have dried up seriously due to drought and excessive drilling in the area.

In the statement made by the DKMP 6th Regional Directorate, it was stated that the total length of the galleries in the cave was determined to be 8 thousand 350 meters with mapping studies in 2012, although approximately 500 meters of the cave is open to visitors. It has been noted that İnsuyu Cave has the characteristics of “Labyrinth Cave” with its complex gallery systems extending in every direction. 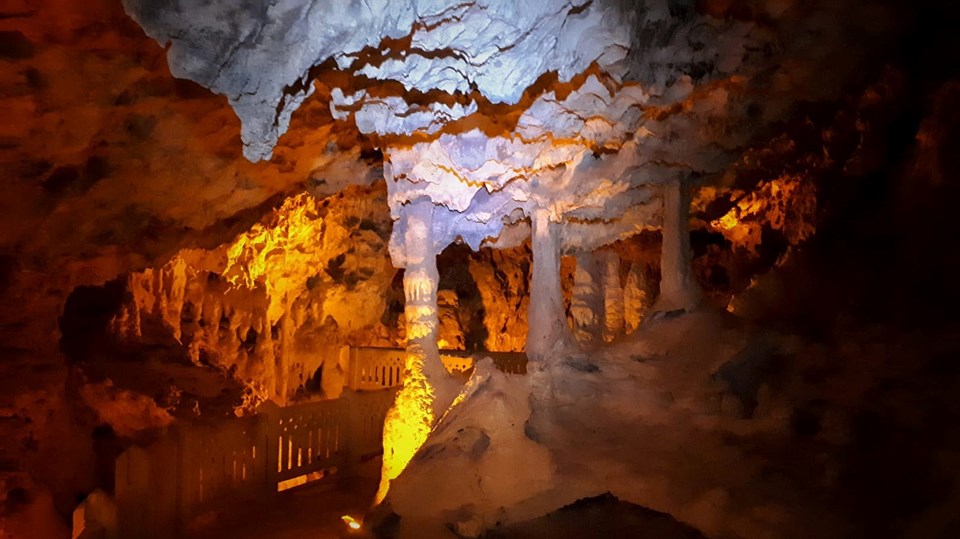 It is building up the lakes inside

It was pointed out that in the İnsuyu Cave, which has gained fame with the 9 lakes in it, the water levels in the lakes have decreased and dried up due to the effect of the global warming experienced in recent years. With the protocol signed between the DKMP General Directorate and the Burdur Governorship in 2012, studies for the rehabilitation of the cave were initiated by the relevant institutions. The interior lighting of the cave, which was adapted to the cave ecosystem by DKMP 6th Regional Directorate, and the new facilities and landscaping made by the Burdur Provincial Directorate of Environment and Urbanization in the cave entrance area, and the improvement works required by the cave and its surroundings.

In the statement made by the DKMP 6th Regional Directorate, it was stated that within the scope of the Nature Tourism Implementation Action Plan studies, it was aimed to increase the cave tourism potential in Burdur, to improve the visitor experience and to raise awareness of the nature conservation awareness of the visitors. It was also noted that the results of the cave survey and determination studies to be submitted to the Burdur Governorship are aimed to contribute to the visitor management and satisfaction of the İnsuyu Cave.

They started with a dream and became the best in Europe: Kenan Yavuz Ethnography Museum

Summer landscapes in the middle of winter | NTV

‘Evil eye bead of the world’ Meke Lake is white

The roof of the world, view of the Himalayas from the sky

Ashab-ı Kehf cave is being brought to tourism

Reminiscent of an open-air museum in Aksaray, ‘Manastır Valley’ takes its visitors on a journey into history.

Pandemic could not prevent: Göbeklitepe is flooded with visitors

The hidden and colorful world of the Mediterranean